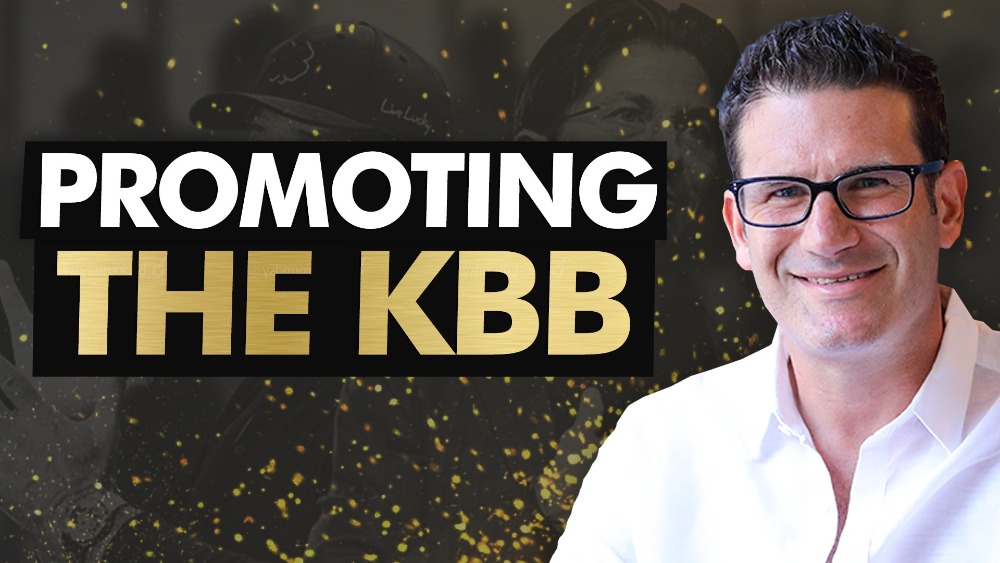 Over the last couple of months, I’ve been working as part of an affiliate marketing team, promoting the Knowledge Broker Blueprint Course created by Tony Robbins and Dean Graziosi. If you’ve been following my podcast and social media channels, then you’ve must’ve seen a lot of content related to the KBB.

Since that is only just a part of the story, I’ve decided to share my entire KBB affiliate experience over the next couple of episodes. I’m going to go through the whole process bit by bit, highlighting the stuff we did well and reflecting on the things we should’ve done differently.

All in all, it was an amazing experience people would typically pay a lot of money for. I got a chance to work with incredible guys such as Tony and Dean, all while acquiring 30,000 brand new leads in the process.

In part one of my breakdown, I’ll go over why I decided to join the KBB affiliate team and how we set everything right up until the free livecast with Tony and Dean, which was a massive milestone in the campaign. I got really deep into the nitty-gritty of it, so when you’re listening to this, make sure you can dedicate yourself to it. There’s a lot of cool stuff you don’t want to miss.

Why I Decided to Join the KBB Affiliate Team

One thing you should know before we get started if you haven’t before. Lead generation is where I’m at my best. During the course of my career, I’ve generated over a billion clicks and gathered over 15 million leads. It’s where I shine.

“When I find a partner that knows how to work leads, that’s where the business is the best for me.” – Eric Beer

From the get-go, the KBB affiliate program sounded like an interesting offer in more ways than one. For starters, promoting other people’s products, while putting my personal name behind them was uncharted territory for me. In that sense, it was an excellent way for me to get out of my comfort zone.

Second, Tony and Dean are pros. They’re fantastic at what they do, which means their campaign was highly-professional, and it had all the elements that made it exciting. Their course costs $2000, and things in that price range are very challenging to sell. Furthermore, their offer was available for only a short amount of time, which means I got to play around with all sorts of ideas and experiment with a wide range of methods.

Lastly, the opportunity to build a list using the personal brands of Tony Robbins, Dean Graziosi and Russell Brunson made the whole deal utterly irresistible.

“Whether you make money or not isn’t really that important if you have a back-end strategy and a back-end plan.” – Eric Beer

The entire affiliate marketing team was operating with a single purpose in mind – creating a hype about the product. Now, some of the other members were already working with large followings they’ve acquired over the years. They had a sizeable amount of warm leads available to them.

On the other hand, I focused on devising a system that would help me convert cold leads.

I created a funnel and set it up at erickbb.com, where people could sign up for my VIP waiting list. If they signed up, along with over $39,000 in bonuses, they’d get access to a private Facebook group, dedicated exclusively to the KBB. The idea behind that was to open up direct channels of communication between me and my list.

In hindsight, there are a couple of things I would’ve done differently. Honestly, I think we jumped the gun a bit and started creating the hype a little too early. We were converting very well, but the earlier the signup was, the bigger the chances were for the lead to grow even colder or just forget that they signed up .

“If someone signs up for the VIP waitlist, I have to get in touch with them, somehow, in some way, asap.” – Eric Beer

The second thing I would probably do differently is I would try to do a better job of reaching out to my list right away. Creating a personal, human connection with your audience is priceless for warming people up to your offer.

In efforts to promote the program, we were able to adapt and generate all sorts of engaging content and release it across different platforms.

First, we used last year’s KBB livecast, adapted it into four episodes, and released it through my Performance Marketer Podcast. Each episode had an intro and an outro which directed people to my KBB funnel.

The second piece of content that was very big for our campaign was the interview I did with Dean Graziosi. Our conversation had so much quality info that I decided to split it up into three parts and release them on consecutive days.

But the interview kept on giving in a way, because we were able to prepare all sorts of content from it and use it across various platforms. Facebook, Instagram, YouTube, LinkedIn, TicToc,… We hit all of these platforms pretty hard, which helped us drive even more traffic.

In retrospect, this was also another hidden benefit of the whole campaign. The content we prepared, especially my interview with Dean Graziosi, is something that will remain online forever. People will be watching these videos years from now. It was a one-time investment that will count forever.

The first major date in our campaign was February 19th. That was when the registration for the big livecast event with Tony, Dean, and Russell opened up.

To reduce drop off, we decided to drive traffic directly to the webinar page. The way that the affiliate program was set up, I still got to keep the leads I generated. But the main difference was, Tony and Dean were helping me convert and get sign-ups. Utilizing the power of their brands, I was able to get a whopping 30,000 leads I could now pitch other stuff to. I can now use my SurveyDetective platform to nurture and segment that list further.

Just a quick reminder here that SurveyDetective, my brand new survey-building platform, will be launching in September 2020.

Gaining 30,000 contacts was the goal of my back-end strategy. If that were all I was getting from this experience, it would’ve still been worth it. But there was still more to come.

Make sure to tune in next week for part 2 of my KBB Affiliate Insights!

0:00
This whole process, just going through it was so amazing. Just watching the launch, and seeing how it all unraveled and seeing how Dean's team handled the affiliates was really, really great. I was really impressed with what they did there. I've been around the affiliate space for a long time and these guys did a really nice job of working and helping and giving assets to the affiliates, helping them in any way they can to promote. They were making it as easy as possible to do so. I think that's another reason why they're so successful.

0:33
I spent the last 17 years building my eight figure performance business without using any of my own money, working with some of the most brilliant direct response marketers in the world today. Now I'm looking for entrepreneurs to join my affiliate army, built on ethics, transparency, and good old hard work. Join me to change the perception of how people view the greatest business in the world, affiliate marketing, and follow along, as I learn, apply and share performance marketing strategies working with some of the brightest people on the planet. My name is Eric Beer, and welcome to the Performance Marketer Podcast.

30:12
Would you like to learn how I built my business using other people's money? If so, go join my 21-day challenge at performancemarketersecrets.com. I look forward to meeting you and welcoming you into our family. And remember, results don't lie, but the people who don't have any tier. Thanks for listening.