How To Make Sure Your Discovery Survey WORKS
16354
post-template-default,single,single-post,postid-16354,single-format-standard,bridge-core-2.9.8,qode-page-transition-enabled,ajax_fade,page_not_loaded,,hide_top_bar_on_mobile_header,qode-child-theme-ver-1.0.0,qode-theme-ver-28.8,qode-theme-bridge,qode_header_in_grid,wpb-js-composer js-comp-ver-6.7.0,vc_responsive

How To Make Sure Your Discovery Survey WORKS 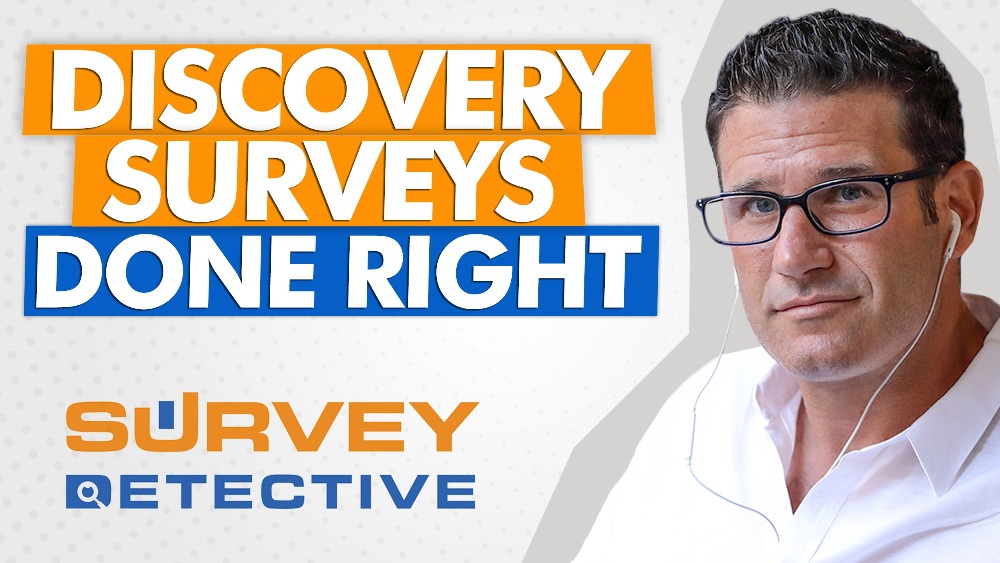 25 Jun How To Make Sure Your Discovery Survey WORKS

It’s time for us to take an even closer look at discovery surveys.

We’ve had our high-level overviews, and by now, I’m hoping you’ve firmly grasped what we’re trying to do with Performance Marketer.

The overall goal is to investigate your audience and better understand their situation than they can do it themselves. But it’s not going to work if you don’t understand the process.

Over the years, I’ve heard so many people complaining about how quizzes and surveys didn’t do anything for their business.

And I’m not surprised! It’s because they weren’t doing it right.

Get ready for some serious investigating, SurveyDetectives!

Discovery surveys will get you going, but they’re not going to make recurring appearances. You set them up, let them out into the world, and then – that’s it! Which is why it’s crucial to set them up the right way and make them count.

Your goal is to learn relevant information about your audience. And you’ll do that by asking a series of engaging, carefully picked out open-ended questions and analyzing their answers.

And remember – not all feedback is created equal. You’re want to listen to the top 20-25% of your audience. These people are your die-hard raving fans, and you’ll recognize them by the vast amount of information they’re providing you in their answers.

You should continuously ask yourself, “Am I providing my audience with enough value?” They need to feel like they’re getting enough in return. Otherwise, they’re not going to opt-in.

The Benefits of Creating a Loyalty Rewards Program

Knowing who your top leads are is incredibly powerful. And one of the best ways to differentiate them from the rest of your audience is by creating a Loyalty Rewards Program.

This is going to be a SurveyDetective feature that I was really excited to share with you.

Basically, with every action you’re requesting from your audience members, you will be awarding them with a certain amount of points. These points can later be used as discounts for your other offers.

It’s a win-win that creates engagement, and I just love it!

Loyalty Rewards Programs are just one of the ways SurveyDetective will provide your business with an edge. We’re still prepping for our launch scheduled for later during the year, but you can stay updated by signing up for our VIP waitlist.

How to Sell Using Psychology

Understanding how your audience thinks is one way of becoming better at selling. But there’s something else you can leverage to improve your results further – psychology!

You don’t have to go far to find examples of psychology being used in marketing and sales. All sorts of principles are utilized to predict and influence customers across the world.

If you’ve ever been at an event, listening to a speaker on stage, you’ve probably been exposed to an array of efforts meticulously orchestrated to get you to buy their product.

When speakers are trying to make a sale, you’ll often hear them use the phrase “by now.” Do you know why?

It’s because they’re relying on suggestions and nudging their potential customers into a mindset where they’re more likely to “buy now.”

This is just one small example of how you can use psychology to sell better.

Creating scarcity by limiting your offer would be another way of utilizing distinct behavioral patterns to your advantage.

In the end, whatever strategy you’re using, it’s always with the same goal in mind – creating action.

“You want to create some action. You want to make people take action.” – Eric Beer

How to Analyze Discovery Survey Data

In today’s episode, I’ve laid out the entire discovery survey outline and explained the crucial points you’ll need for it to work. But once you have your data, it’s time to do some serious detective work and get to analyzing.

“You’re doing this because you’re looking to identify your segments.” – Eric Beer

While examining the data, you’re trying to spot specific patterns and recognize recurring objections. These patterns will allow you to identify your audience segments and create outcomes for your segmentation survey funnels.

Your goal here is to look for a relatively even distribution across segments. If you’ve identified four segments, and one of them has more than 50% of your audience, you can’t count on having good results later on.

The closer you can get to an ideal situation, which in this case would be 25% per segment, the better.

In doing so, you’ll set up the right conditions for using a segmentation survey and get much better results in the end.

0:00
That's where a lot of guys do this wrong. That's why quizzes don't work for people and surveys don't work for people. They don't really understand how to do it. Right? When they're sitting there and they're creating this is just like making up why they're asking questions and trying to make it fun. And it's like - No, no! There's a whole structure to this. You're doing it because you want to understand who these people are.

I spent the last 17 years building my eight-figure performance business without using any of my own money, working with some of the most brilliant direct response marketers in the world today. Now, I'm looking for entrepreneurs to join my affiliate army, built on ethics, transparency, good, old hard work. Join me to change the perception of how people view the greatest business in the world, affiliate marketing, and follow along, as I learn, apply, and share performance marketing strategies, working with some of the brightest people on the planet. My name is Eric Beer, and welcome to the Performance Marketer Podcast.