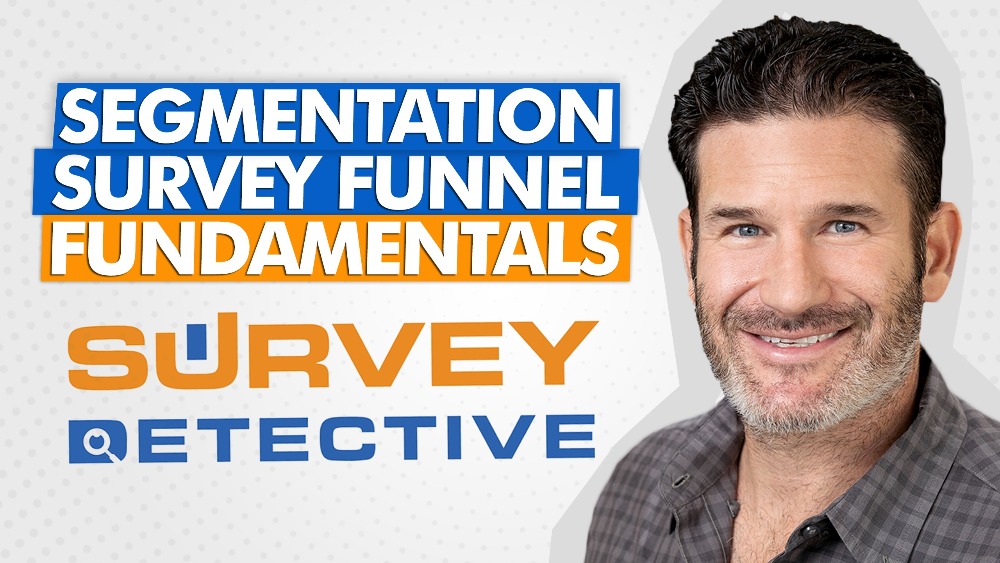 In the second part of our first-ever Performance Marketer Founding Members Meeting, I introduced my founding members to the wonderful world of segmentation surveys.

Writing surveys is a skill you’ll perfect over time, but we’re looking for some quick wins and instant gains. Imperfect action will get you there, but you have to master the basics first.

I’m presenting this segmentation survey framework to equip you with the fundamental understanding of why you should use them, how they work, and how they help you build your email list.

When you combine these insights with my new SurveyDetective platform, you’ll be gaining a significant, unmatched edge for your business.

The 4 Components of the Segmentation Survey Funnel

When a person takes a survey, the start page is the first thing they see. It’s supposed to grab their attention, inform them about the main topic of the survey, and encourage them to take it.

The next section of the funnel is the questions page. It is a place where the people you’re surveying provide answers that allow you to segment your audience.

After they’ve answered your questions, each surveyee will move on to a lead capture page, corresponding with the segment they belong to. The messages on those pages will be tailored to their needs and will aim to dismantle their objections.

“You want people to stay. You don’t want them clicking away from you.” – Eric Beer

Step four of the funnel is an outcome page, a place where you can guide your new leads to which will keep them engaged with your business or offer. The outcomes are designed to match different segments of your audience. That is why you need to determine these segments first, and you do that using discovery surveys, which we talked about in our previous episode.

Each page should be carefully designed to guide surveyees through the funnel, step by step.

The questions section is crucial for the segmentation process, and there are many ways you can organize and set it up.

For instance, my SurveyDetective platform allows you to easily map out questions and create complex logic that adjusts their order based on the user’s previous answers. It’s an incredible topic for future podcasts, but we’re going to stick to the simple stuff for now.

One of the most important question types for building momentum is no-brainer questions. They engage your audience because they’re easy to answer, and you’ll want to put them at the top of your survey.

Once you’ve generated enough momentum, it’s time you ask the segmentation questions. These are the multiple-choice questions that will help you classify your audience into segments and, ultimately, find the right message for presenting your offer.

“You want to be able to describe someone’s situation better than they can do it themselves.” – Eric Beer

Understanding the Flow of the Segmentation Survey Funnel

The sections of the segmentation survey funnel should have a particular flow. By understanding the relationships between components at play, you’ll be able to create the best possible experience for your survey-takers.

At the very top of your funnel, which is your start page, you’re looking to engage and intrigue by using your hook – the big promise without the pain. Then you’re going to ask them questions that will help you figure out which segment they belong to. From then on, you’ll take them to a lead capture page tailored to each segment with a goal of generating curiosity.

You can use ethical bribes, such as free ebooks, webinars, and other types of engaging content, as a way of acquiring leads. However, make sure the thing you’re offering is valuable to the type of person you’re trying to attract. You don’t want to end up with a bunch of people on your list that you simply can’t sell to.

Later on, you can guide them to outcome pages, where you can further inform them about yourself, your business, or your offer. It’s essential to keep them in the loop and interacting with your brand.

There are lots of factors at play here, but that shouldn’t scare you. In fact, the main reason why I created SurveyDetective was so that entrepreneurs with zero tech skills could use the power of surveys to upgrade their business.

We’re working hard to set up our launch scheduled for later this year. In the meantime, you should sign up for my VIP waitlist and make sure you don’t miss all the cool stuff we have in store for you.

You can expect more golden nuggets from the topic of surveys in future episodes. We’ve only scraped the surface, but it should be enough for you to get some quick wins and create momentum.

0:00
The goal of your segmentation survey funnel is you want to be able to describe someone's situation better than they can do it themselves. You want to be able to explain to them in your outcome that you understand them… You… They're, they're... They're understood. You can relate to them.

I spent the last 17 years building my eight-figure performance business without using any of my own money, working with some of the most brilliant direct response marketers in the world today. Now, I'm looking for entrepreneurs to join my affiliate army, built on ethics, transparency, and good old hard work. Join me to change the perception of how people view the greatest business in the world, affiliate marketing, and follow along, as I learn, apply, and share performance marketing strategies for working with some of the brightest people on the planet. My name is Eric Beer, and welcome to the Performance Marketer Podcast.

Would you like to learn how I built my business using other people's money? If so, go join my 21-day challenge at performancemarketersecrets.com. I look forward to meeting you and welcome you into my family. And remember, results don't lie but the people who don't have any tier. Thanks for listening.