21 Mistakes You Want To Avoid When Building Your Survey (and How to Avoid Them)
16376
post-template-default,single,single-post,postid-16376,single-format-standard,bridge-core-2.9.8,qode-page-transition-enabled,ajax_fade,page_not_loaded,,hide_top_bar_on_mobile_header,qode-child-theme-ver-1.0.0,qode-theme-ver-28.8,qode-theme-bridge,qode_header_in_grid,wpb-js-composer js-comp-ver-6.7.0,vc_responsive 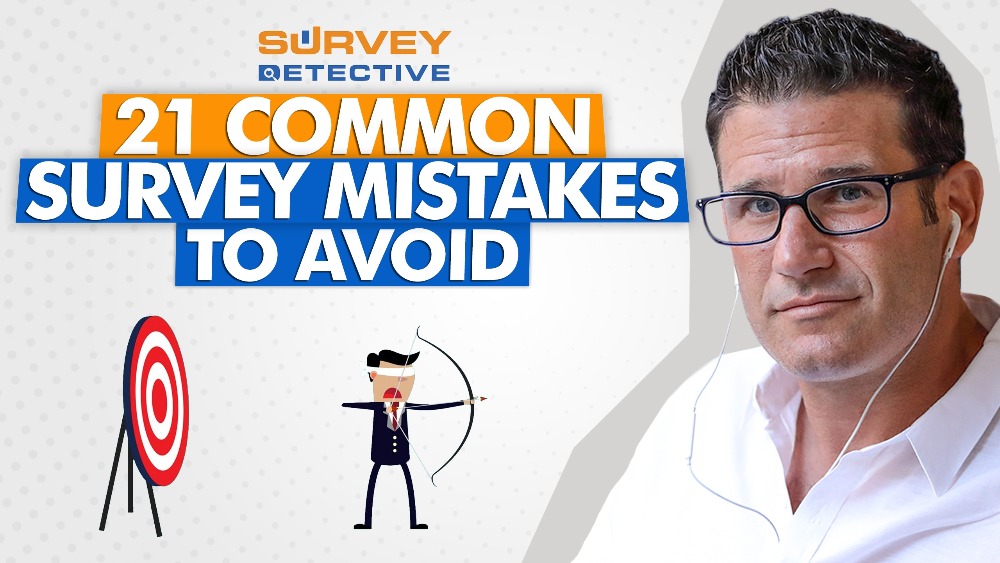 When you’re trying to learn a new skill, there are certain things you can always count on. There is always going to be some kind of a learning curve, and some people will find it easier than others.

One thing is sure – no one ever got it right on the first go. I’ve been in this business for over 20 years, and there’s no doubt that the difference between my first and most recent survey is nothing short of astronomical.

So we all learn by failing at first and getting better as we go. But why we fail and how speaks worlds about the speed of our journey.

In all my years of building surveys and helping others do the same, I’ve seen people disrespect the process countless times. And as long as you’re trying to pull questions out of thin air, hoping you’ll stumble upon crucial information about your audience – you’ll always be a long way from harvesting the true power of surveys.

You can mess up a survey in many ways, although some are much more common than others. I recently set a challenge for myself and was able to list out the 21 most common mistakes people make when building surveys.

Today, I’m going to share every single one and explain exactly how to avoid them.

How to Avoid 21 Common Mistakes People Make When Building Surveys

A quick side note. If you recognize you’ve been doing any of these, don’t get discouraged. Adjust and move on. It’s just part of the process.

Before you start making a survey, you need to understand who it is that you’re trying to talk to. It sounds obvious, but I’ve seen people churn out survey after survey without any direction or vision whatsoever. Understanding “The Who” gives meaning and structure to your efforts.

“You want to understand who to listen to and who not listen to.” – Eric Beer

Not all leads are created equal. The opinions of your die-hards are much more valuable, so you need to figure out who these people are. It’s something that I’ve particularly paid attention to when designing my SurveyDetective platform, and we’ve built all sorts of quantitative analysis systems into it.

3 – Even Out Your Segments

In a perfect world, if you were segmenting your audience into four sections, each of them would contain 25% of your audience. This ideal scenario will never happen, but you can’t allow your results to drift from it too much, either. If one of your segments has more than 50% of your audience – it’s back to the drawing board.

Your segments must never overlap, not even slightly. If there’s an answer that would place a member of your audience in more than one section, you need to rethink and redefine your segments.

5 – Create Curiosity With Your Hooks

The hook is the thing that gets people to start clicking. For it to be effective, it needs to create curiosity by promising people that they’ll learn exciting new information about themselves.

6 – Use an Informative Start Page

Before they start answering survey questions, people need to know what they’re in for. How long does the survey last? What do you intend to do with the information? What’s in it for them? If people know what to expect, they’ll be more likely to engage and complete your survey.

To ensure you’re reeling in quality leads, the incentives you’re offering have to be relevant to your audience exclusively. It has to be something intrinsically appealing to them in particular, and not just anybody. No iPads!

8 – Make Sure Your Surveys Are Responsive Across ALL Devices

Test out your survey across platforms to make sure it’s working correctly. For instance, if the mobile version has a plain font or a messy image resolution, it might come off as sloppy, and you’ll end up with a higher drop off rate.

9 – Present One Question Per Page

Don’t overwhelm your audience. Asking one question per page allows your surveyees to maintain focus and keeps them engaged longer.

10 – Have a Clear and Concise Outcome Goal

You need to know precisely what it is you want your audience to do after taking your survey. Remember, when building a survey, you’re working from your outcomes backward, which is why they need to be very straightforward and to the point.

“If you’re trying to generate some leads from people that don’t know who you are – less is more.” – Eric Beer

Be efficient with your questions. If you can remove a question and still have the same outcome – get it out!

12 – Do Not Ask Leading Questions

The only way for you to get relevant data is to remain impartial and not use leading questions. If you’re nudging your audience to answer a certain way, the data itself will be useless.

Absolutes such as “always” or “all the time” can create confusion and won’t help you learn much about your audience. In other words, make sure you stay clear of them always and at all times.

14 – Do Not Leave Room For Interpretation

Be direct and on point with your questions. If a single question can be interpreted differently, different people aren’t answering the same question, are they?

15 – Do Not Make Assumptions

Don’t build your survey with the assumption that people know or understand something specific. If you’re wrong, a portion of your audience won’t be able to give you a valid answer.

People sometimes ask two questions as one either because they think it’s more efficient or they don’t understand the situation very well. Combining questions can be extremely problematic because there is a good chance people will have different, or even opposing answers. Keep your questions clear, precise, and above all – separate.

If you’re asking a multiple-choice question, make sure you have all of the options covered. You can’t allow having a question that a portion of your audience can’t answer.

18 – Use the Right Question Format

Open and closed formats are two fundamental types of survey questions. You need to understand when to use which because if you don’t get it right, it can skyrocket your drop-off rate.

I’ve found this to be the ideal range for surveys. Asking more than 12 can overwhelm your audience, while any fewer than 3 creates suspicion about the validity of your survey.

You must allow people to see their progress and position themselves during a survey. You can use a classic progress bar, percentages, the number of questions remaining,… Whatever you can think of – use it. It will keep people engaged while eliminating suspense.

If you’re not sure what you’re doing, find someone who can help you fast track your success. You don’t have to suffer and do everything by yourself. There’s plenty of people you can consult out there; all you have to do is ask.

And that’s it! We did it, Performance Marketers!

I really hope this list goes a long way in helping you become a true SurveyDetective.

On that thought, make sure you sign up for my SurveyDetective VIP waiting list and stay updated on our progress. The release is getting closer by the day I can already feel how amazing it’s going to be!

As always, if you have any questions, leave a comment or reach out to me directly through social media.

0:00
What's up Performance Marketer Nation? Today we're going to talk about 21 mistakes you want to avoid when you're building a survey. So let's dive in, now.

I spent the last 17 years building my eight-figure performance business without using any of my own money, working with some of the most brilliant direct response marketers in the world today. Now I'm looking for entrepreneurs to join my affiliate army, built on ethics, transparency, good old hard work. Join me to change the perception of how people view the greatest business in the world, affiliate marketing, and follow along, as I learn, apply, and share performance marketing strategies, working with some of the brightest people on the planet. My name is Eric Beer, and welcome to the Performance Marketer Podcast.

Would you like to learn how I built my business using other people's money? If so, go join my 21-day challenge at performancemarketersecrets.com. I look forward to meeting you and welcome you into my family. And remember, results don't lie with the people who don't have any tier. Thanks for listening.